Kula Devi and her Temple 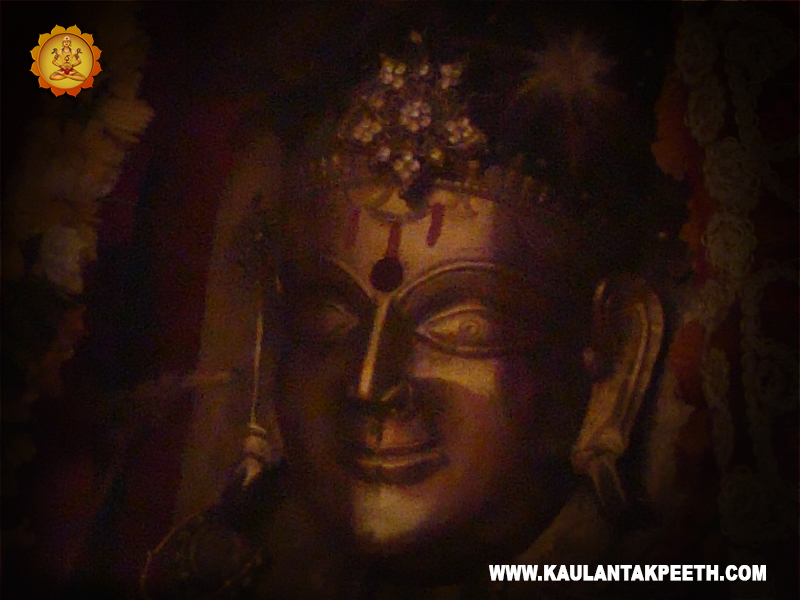 Kula Devi is considered as the tribal Goddess. This is partly due to her tamasic form of Vikulla which includes iconography resembling animals.

Before you go ahead to know about Kurukulla Devi Ji. First you must understand the meaning of the word ‘Nath’. There is one ‘Nath’ which is the caste Nath, they are the Nath Jogis, who are the followers of Mahasiddha Maha Matsyendranatha. While there are another tribe of ‘Nath’ who are the followers of Swacchanda Bhairav Mahadeva. They are from the tradition of Himalayan Siddhas. Here Nath is not the caste. Nath is just the title, that represents that the person belongs to Himalayan Siddha tradition. Himalayan Siddha tradition Naths (people) can be from any caste from their birth.

One must be clear that it is only the Himalayan Siddhas, the ‘Nath’ (Siddhas), who take care of all the tradition of Kurukulla Devi since thousands of years, since the origin of the ‘Parampara’, the tradition of Kula Devi, and not by the people who are born in ‘Nath’ caste (associated with Guru Gorakshanath Ji and Nath Sadhus).

The ‘Siddha Dharma’ reveals that the presiding deity of Kaulantak Peeth, Kurukulla is the Supreme Goddess who established Kaulantak Peeth. In Siddha Dharma, Kurukulla is known to be none other than Yogamaya, the Supreme Goddess. When the supreme consciousness (ब्रह्म) alone existed, then through self-resolve (एकोऽहंबहुस्याम), supreme consciousness divided into all. In this process, one kula or knowledge system manifested. This is the tradition of creation (Utpatti Kula उत्पत्तिकुल). When the need was felt for preserving the state, another tradition of perseverance (Stithi Kula स्तिथिकुल) was formed. Alongside the tradition of destruction (Samhara Kula संहारकुल)came into being.

Kula Devi even though, was in manifested form, but had no physical form. As time passed, Agama tradition was found after the union of Bhagwan Shiva and Parvati Mai Ji. Subsequently, in the realm of Devas (enlightened divine beings) Kaulantak Peeth was established. For this, from the Yoga body of Parvati Mai ji, Goddess Kurukulla manifested. Ma Parvati divided Herself into three forms, basically representing the three modes of nature, the Satwa, Rajas and Tamas. The Satwa mode transformed to Sukulla form, Rajas mode to Kurukulla and Tamas form to Vikulla. Similarly, Bhagwan Shiva also divided Himself based on the same as Shakti to Mukta Bhairav for Sukulla, Swatantra Bhairava for Kurukulla and Swachhanda Bhairava for Vikulla.

Goddess Sukulla then settled at the hidden mountain ranges between Kashmir and modern-day Uzbekistan. Her tradition was later renamed as Kashmiri Shaivism. Goddess Kurukulla settled at the hidden mountain ranges between the Uttarakhand and Kashmir, Nepal and upper Tibet. It is also believed that the place Kullu derived its name from the word “Kulluta” and Kulluta derived its name from the Goddess Kurukulla Herself. Her form Vikulla, settled at the mountain ranges that lie somewhere between Nepal, Bhutan extended to some places of Myanmar. The place is also known as “Kaamaru Desh” which can extensively be found in the text of “Kaula GyanaNirnaya” by Mahasiddha Matsyendra Nath Ji Maharaja. The “Kaamaru Desh” as based on Kaula Siddha tradition started from the land of Vikulla and extended till the ends of South East Asia encompassing places like Thailand, Bali, Cambodia etc.

Origin as per Shakta tradition of Kaulantak Peeth

According to the ‘Shakta tradition’ within Kaulantak Peeth and ‘Siddha Dharma’, She is believed to be the ultimate Goddess who was neither created nor destroyed. She existed before everything. She first created all the Gods and then this universe and then it is through Her power that the creation is always moving forward.

She one day willed to form the creation, so She stretched the strings of her bow and then She let it loose. With it, the first sound that was produced was aum ‘ॐ’. It was not produced directly, the first sounds created were the ‘swara varna’ but because of the reverberation of the ‘swara varna’ the half sound of ‘म’ got attached to it. Hence, the sound aum ‘ॐ’ was created.

The sound ‘ॐ’ is said to be indestructible because it is the outcome of the reverberation of the swara varna. The sound always resonates, therefore ‘ॐ’ is eternal because the sound in the universe is never destroyed. It only becomes inaudible to us. It never ceases to exist.

From ‘ॐ’ came everything and from Ma Kurukulla, came the reverberation ‘ॐ’ So She is believed to be the cause of all the causes in this universe and beyond and the origin of all origins.

From the three forms of the Goddess Kurukulla, there are sixteen main forms. Each form, known collectively as “Shodashadal Vaasini Kurukulla” (षोडशदलवासिनीकुरुकुल्ला), or Kurukulla who resides in sixteen petals”. These are the goddess of sixteen petals (forms) whose boon fulfils all desires. Each of her form has her own iconography and tantra rituals and scripture. Her qualities in each of these forms are as per her name.

These are the goddess of eight petals (forms) whose boon fulfils all desires. Each of her form has her own iconography and tantra rituals and scripture. Her qualities in each of these forms are as per her name.

Devi Vikulla Ji has ten distinct forms who are collectively referred to as DashardalVasiniVikulla(दशारदलवासिनीविकुल्लाor Vikulla who resides in the ten petals). These are the goddess of ten petals (forms) whose boon fulfils all desires. Each of her form has her own iconography and tantra rituals and scripture. Her qualities in each of these forms are as per her name.

Kurukulla and her relationship with Nature

As per ‘Siddha Dharma’, Kurukulla is the ruler of Kulluta Mandala. She has special relationship with flora and fauna of the Kulluta Mandala. The legends reveal that the fauna and flora collectively prayed to her from the protection at the time of Kali Yuga. As offerings, the birds especially the Jujurana (Tragopan), Monal (Himalayan Monal) offered their feathers and the flora, they offered flowers and herbs.

Devi Kurukulla manifested before them and then she accepted their prayers by adorning the feathers to her head. She also accepted the herbs and flowers and she adorned it on her head as her decoration and ornament. Siddha Dharma therefore offers and adorns the crown of her statue with the feathers from the respective birds and also her crown is adorned with leaves and stems of herbs and shrubs. She is also believed to be seated in flowers, hills, trees etc of Kaulantak Peeth. It is considered a grave sin to disturb the tranquility of the nature.

She is also believed to roam in nature in the forms of small birds. Small birds are hard to locate because of their size and mobility. They can roam freely without being able to spot. Ma Kurukulla character traits also compliment the birds. She never ever reveals herself even being the cause of the very act itself. She is hard to spot like the birds.

Besides Nature, she also bestows knowledge of various art forms like singing, dancing, wisdoms, sculptures etc. She is also the goddess of magic and miracles. She is a goddess who always surprises the worshipper with her prowess.

Unbroken Legacy of the Idols, MaliMukh & Nashan of Kula Devi

It is a matter of more than fifteen hundred years of legacy. Around 1500 years ago, the then His Holiness, Kaulantak Nath, crafted a small sculpture of Kula Devi, with the small sculpture of Shri Swacchanda Bhairav along with a small size ‘Malimukhs’ of Swachhanda Bhairav and of the three forms of Kula Devi, that is, of Goddess Sukulla, Goddess Kurukulla and of Goddess Vikulla. These were made from the ‘Ashtadhatu’.

These two sculptures of Shri Swacchanda Bhairav and of Goddess Kurukulla, along with the four Malimukhs, were then passed on to the next Kaulantak Nath. This became the tradition and the unbroken legacy which continues till the present times. Along with the Malimukh and the sculptures, few ‘Nashan’ (symbols that represent Goddess Kurukulla) were also passed to the subsequent Kaulantak Nath. These are as follows:

When the sculptures, the ‘Malimukhs’ and the Goddesses’ ‘Nashan’ were handed over to His Holiness, Kaulantak Nath, Mahasiddha Ishaputra, He kept and consecrated these in His ancestral paternal house in Dharakhari village. Since it was kept in the Paternal House of His Holiness, it became difficult to maintain the secrecy of the Kula Devi rituals from the relatives and guests visiting the house. It was then that His Holiness requested His father to help Him. Then the father of His Holiness built a small traditional temple with stone, mud and wood for the Goddess Kurukulla in Chawali, near Kotla village. His Holiness then brought the Goddess along with Shri Swachanda Bhairav idols, Malimukhs, Nashans and consecrated them in the newly built temple in Chawali.

It was in this temple that the Guru of His Holiness used to visit the Goddess and passed on the knowledge of many Sadhna to the Kaulantak Nath. It must be noted that visitors were completely prohibited in this traditional temple of the Kula Devi.

And the few who knew about the Devi temple were requested not to reveal anything about the temple, about Devi Bhagwati and Kaulantak Nath. For this very reason, the temple’s architecture was similar to the simple ‘Kathkuniya’ house style of the Himalayas.

In 2015, when the Guru of His Holiness along with the Gurumandala,declared Him as the Panch-Peethadheeswara, it was during this time that the Guru of His Holiness, ordered Him to rebuild the temple of Kula Devi and open it for the Bhairav and Bhairavis and the followers of the Siddhadharma. It was in 2017, that the reconstruction of the Kula Devi temple began in Chawali.

Sarva Kala Nayak, MahaHimalayadhipati Shri Siddha Siddhanta Nath Ji initiated the work of the Kula Devi Ratha. The Devi’s Rath was in the safe custody of the MahaHimalayadhipati Shri Siddha Siddhanta Nath Ji. It was in the year 2004, when the Goddesses’ Rath and other belongings of the Rath and the traditional ‘Deuli Vidhan’(Deva Parampara tradition of Devi Devatas) was passed on to His Holiness, Kaulantak Nath, Mahasiddha Ishaputra.